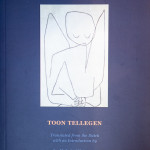 collected himself into the ground

and an angel touched him very gently, very carefully
and with the greatest possible tenderness
and autumn came
and the wind lifted the man up and blew him away

children, a few small children, caught a last glimpse of him dancing
on the rays
of the setting sun.

Toon Tellegen, A Man and an Angel, Shoestring Press 2013. Translated from the Dutch by Judith Wilkinson 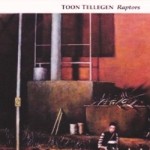 was already himself,
my mother was still a young girl,
my brothers so very unborn
that they sparkled in the sun

‘are you coming…’ my mother asked,
she was wearing red shoes
and her mother’s corals,
she had glitters on her nails
and in her long red hair,
but dumbness struck my father,
chased him away

stalks snapped, frogs blew themselves up
and everything that shone evaporated

it was May
and my father didn’t know that he would never be anyone
but himself,
and that he lacked something,
something painful,
something invaluable of no consequence

and that summer was in the air,
and something misleading,
over and over again.

Just as a Roman army, after a defeat,
accepted the journey back
so, after every loss, a journey back is possible.
Accept it.

Don’t accept the loss
but the journey back that follows it
all the way into your own entrenchment,
the body’s armour

all the way to where you were
before the loss followed
and choose something else.

A road to Rome.

I saw the neighbours opposite one morning
packing their cases with sea air.
My caravan of playmates became the tail
of their kite, waving from the window of their car,
snagging briefly on a balcony
before they turned the corner.

Not mine. Somewhere halfway, the sun
struck its shadow into the aquarium of our apartment
where I was pressed against the glass, growing ever paler
as my gaze followed their disappearance
until they’d turned the corner of my memory.

On the coast, my mother later said, they too were torn apart.
Although they did live there, for a little while,
in airy bunkers with open windows. In a spot where we had not
expected them, there were poplars
waving, festive and communicative
yet contained, in their foliage
the light of the past day
had been collected, like stained glass
they gave warmth to the valley

we stood in the evening beyond tracing
not waiting for a thing, for we lived here
in this lostness, this tenderness
the light of poplars

TO A MAN IN THE SUPERMARKET

Then, poisonous muse, he slid into my aisle,
a man, small, fat, with a vacated face,
who looked as if his name were Jim or Bill.
I knew exactly what was on his mind:
the taxman, football, a Miss Holland pageant,

broccoli, coffee filters. His whole mouth
a thin letter of intent, alive with
blank conviction. And I was pregnant with a
twisted poem, wanted to hate him, couldn’t –
for everything he dreams, I thought, I dream

no better. Be greeted then, pale uncle,
whose magic dreams of bed sheets are like mine.
Join the queue, then off home, doormat, fridge,
the sofa, oven, then that sleep again.
I’m so afraid you might not even exist.

What she did before me? With Hugo she ate lobster,
with Thomas she drove through LA, with Sander
she slept in Berlin, with Jean, with Stein… And I,

so green about the secret algebra
of our pleasure; whose locks, whose lips, whose
glance do I see mirrored in her face?

She doesn’t know her laugh is just like Lisa’s.
And I don’t see how Hugo is like me.
But six weeks on, an audience of ghosts

has gathered in a circle round our bed,
to watch our slow, sweet, desperate attempts
to banish their deepest names from our heads.

You must, they said, face the truth.
Now! Immediately!

When it grew dark they whispered:
now you may face something else –
if you like.

It was quiet
and I faced love
and thoughtlessness with its giant wings
and the simplicity of the moonlight on my wall.

Toon Tellegen, About Love and About Nothing Else, Shoestring Press 2008. Translated from the Dutch by Judith Wilkinson

Nature is for the satisfied or hollow.
And what does it add up to in this land?
A patch of wood, some ripples in the sand,
A modest hill where modest villas follow.

Give me the city streets, the urban grey,
Quays and canals that keep the water tamed,
The clouds that never look finer than when, framed
By attic windows, they go their windswept way.

The least expectant have most to marvel at.
Life keeps its wonders under lock and key
Until it springs them on us, rich, complete.

One dreary morning all this dawned on me,
When, soaking wet in drizzly Dapper Street,
I suddenly felt happy, just like that.

So bound
So free

Ominously low
the yellow sun hangs
above the roofs.
Trees wring their branches
as the wind rises.

Fear presses an ice-cold
hand in my neck. Where
are you? What is
happening to you?

I’d like to be
softer than spume
and yet strong as resin
so I can cover you, shield you
from the needle-sharp teeth
of the night and the blight
that threaten you.

©of all poems featured on this site remains with Judith Wilkinson